The following article features in Issue One of the ST BREAST magazine.

Within 72 hours of her breast cancer diagnosis four years ago, Ally Fairbairn found herself in the offices of Melbourne breast cancer surgeon Chantel Thornton. She was pragmatic, telling the surgeon to just “do whatever you have to do and tell me everything you are doing”. Ally was diagnosed with an aggressive early breast cancer that had begun to spread to her lymph nodes. Chantel remembers being impressed by Ally’s no-nonsense, project-oriented approach. “I knew she was a coper.” Chantel has since guided Ally through a range of surgeries and breast cancer treatments – including a full breast reconstruction.

Today, it is clear the pair regard each other as friends, rather than merely doctor and patient. Both say this mutual trust is vital because a breast cancer journey means surgeon and patient are linked for a lifetime.

“I started checking my breasts every week in the shower a couple of times a week after Kylie Minogue was diagnosed and she was so young.

I had done it on the weekend, but then on the Tuesday I found a lump. It had not been there on the Saturday morning. I took myself off to the GP and that’s where it all started. I had a mammogram and within 24 hours I had an appointment with Chantel.

The GP told me I would get on really well with her, and she was right. Chantel has an ability to quickly assess the person on the other side of the desk and give that person exactly what they need. She worked out I was not highly emotional, and also that I needed lots of information. I told her I wanted a really aggressive treatment plan. I am pretty competitive, so I decided to tap into that personality trait and give it everything I had to beat it. I wanted to do everything which was immediate removal, surgery, lymph node removal and temporary reconstruction. About three weeks after the temporary reconstruction I started five months of chemotherapy and radiotherapy, then stage 1 of permanent reconstruction, hormone treatment, and then the final stages 2 and 3 of my reconstruction.

I think all in all, from diagnosis to that stage was about 2.5 years, which sounds like a long time, but when you are in the middle of it, it does not feel like that long.

The worst bit? I don’t tend to think of negative things, but the side effects of chemotherapy were challenging. But my breast care nurses were great and I had a good pharmacist on speed dial.

I worked throughout my treatment and this was really important to me, to get up and keep going to work. My partner was really fantastic as well. We had already made the decision not to have children, so the risk of infertility from any treatments wasn’t really a big issue for us.

Before breast cancer I had quite small breasts and I had never ruled out a boob job. So, when this all happened, I opted for tissue expanding surgery initially (which can be quite uncomfortable) and then after all my treatment, I went for a full deep inferior epigastric perforator (DIEP) flap reconstruction, which takes tissue from your abdomen to build new breasts. I went up a breast size and I had a tummy tuck at the same time.

I am really happy with the result. Soon I will get the nipple area tattooed and that will complete the reconstruction. I am in remission and I will be on treatment for the next 10 years and I will come to see Chantel every year for a check-up.

Breast cancer has meant I have definitely changed the way I go about life. I tend to say yes to more experiences. I do more charity work and I like giving back. Sometimes I talk to other patients Chantel is seeing about their surgeries or their treatments. That is really rewarding. I live in the moment a lot more. I don’t worry about what’s going to happen in the future. It may or may not be there, so what’s the point in worrying about it?”

I still remember Ally coming into my office. She said, ‘let’s just do it Chantel’. Like Ally, I do get to know a lot of my patients very well.

I think showing them that you care is so important. I believe our immune systems are integral to fighting cancer and from the moment we meet a patient we should make them feel safe, secure and well-looked after. I truly believe it can change their mindset and even their survival. We can’t prove that yet with science, but one day I hope we will be able to.

I always do my best to make their breast reconstructions look beautiful. I think it’s really important, because women with breast cancer can live a very long time. I don’t want them waking up every day and looking at my work with disappointment. If the breast looks as normal as it can, then that is one thing a woman does not have to worry about.

Probably 70% of patients these days are having breast conservation surgery, and previously many of these ladies would have had mastectomies. We know that survival outcomes are the same, whether they have mastectomies or conservation surgery. Some women are uncomfortable with this though, because they are worried that if tissue is there, then they may have a recurrence.

I want women to know that we do have excellent reconstructive options now, using either implants or tissue or muscle that’s taken from elsewhere in their bodies. You can use the gluteal muscle, inner thighs, the back. It depends on where the patient has appropriate tissue to remove. Some ladies don’t have a tummy, so there is just not enough abdominal fat.

Ally had a temporary tissue expander in first, then we moved to full reconstruction after all her treatment. She had the DIEP flap surgery, which has been an option since the early 2000s. With this surgery, you effectively get a tummy tuck as well because we make an incision from hip to hip, and lift the tissue from there.

I would not typically offer a DIEP flap as a reconstructive option straight away to patients though, because it is a massive operation and it can take six to eight weeks to recover. If the chemotherapy is delayed, then that could impact survival.

The reason I would put in a temporary implant or a tissue expander, is because you can’t just remove the breast and then do nothing, because the skin will collapse and you won’t have anything to work with later.

The beauty of using a patient’s own tissue is that it grows with the patient – when they grow, their breast grows. And they look more natural. If you see someone undress who has had a DIEP flap reconstruction you might never know.

Some ladies do still choose to have an implant, under their pectoral muscle. But it does depend on the age of the patient. I think some women are becoming less satisfied with having implants and particularly now, because they have been a bit controversial.

Women should know that they can get a beautiful result from reconstructive surgery these days and not feel self-conscious. Surgery has come such a long way. It really is a privilege doing this job, becoming a part of their lives and helping these women affected by breast cancer. What an honor it is, to also call them friends.” 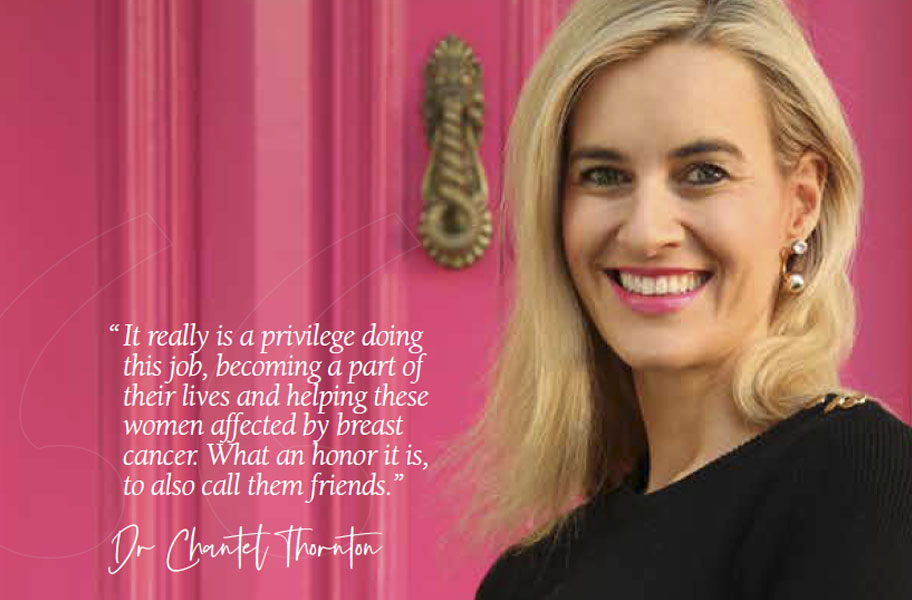