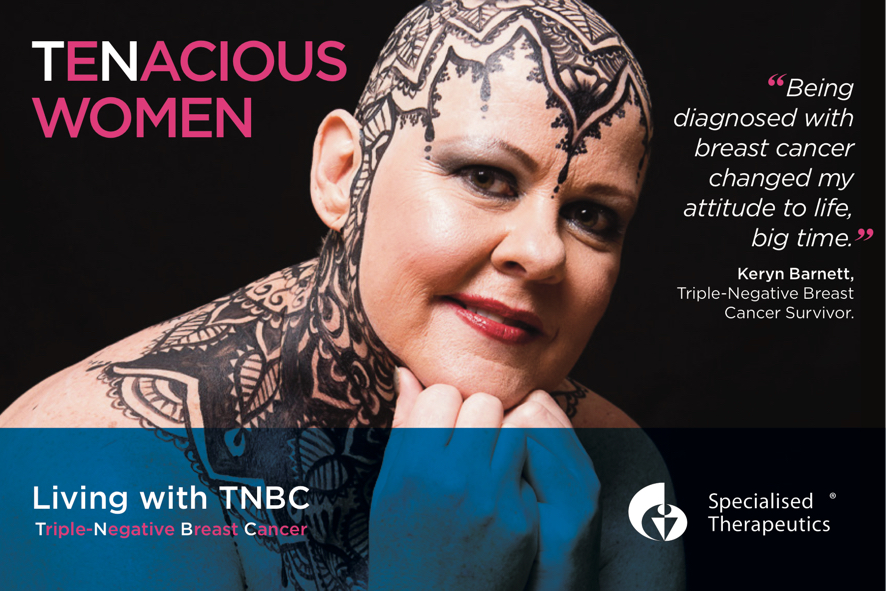 TELL US ABOUT YOU AND WHEN YOU WERE DIAGNOSED.

I am 45 years old, I have two girls and I am a single mother. I was diagnosed with triple-negative breast cancer at the end of 2014. It was right on Christmas – the worst Christmas ever. My 12 year-old was just bawling her eyes out, because she equated cancer with dying.

In 2015 I had six months of chemotherapy followed by 28 days of consecutive radiation treatment. During that first chemotherapy session I bawled my eyes out for six hours straight. My sister was also diagnosed with triple-negative breast cancer last year, so now there is a big question as to why two sisters who don’t carry the BRCA gene have both got triple-negative breast cancer.

HOW DID THE DIAGNOSIS CHANGE YOUR LIFE?

I had never known what to do with my life. I always just breezed along and while I was never unemployed, I didn’t really know what I wanted to do. Now, I am actually studying radiation therapy.I am in my second year of a four-year course and I am loving it. I have found what I want to do.

DID YOU KNOW ANYTHING ABOUT TRIPLE-NEGATIVE BREAST CANCER BEFORE YOU WERE DIAGNOSED?

I knew nothing about it. I was like a deer in the headlights. I thought I just had to go with the flow and do as I was told. My cancer was a grade 3.

I had a lumpectomy but I did not need a mastectomy. I don’t let it consume my life, but yes, I know I am at higher risk of the cancer returning.

I have a fantastic oncologist and I just love her to death, because she is straight up and down. When I asked her what triple-negative meant, she said, ‘put it this way, if you had to choose any one, you don’t want this one.’ I just said, ‘I don’t do things by halves, do I?

WHAT HELPED YOU TO STAY POSITIVE THROUGHOUT YOUR CANCER DIAGNOSIS AND TREATMENT?

Without the help of the local community, I would not have got through it. The Hunter Breast Cancer Foundation organised lawn mowing, house cleaning and things like that.

HOW ARE YOU GOING NOW?

I am a very optimistic person and I surround myself with positive people.

I steer clear of people who dwell on things or hold grudges.

I was forced into a position where I was supporting two children as a single parent and not earning an income because I was sick. But you can make it work and that’s why I am at university now.

I try to stay fit and active, because I put on 40 kilograms as a result of the steroids I took along with the chemotherapy drugs. I used to be a size 6-8 and now I am a size 16. But I am fit and healthy, playing softball on a Saturday and dragon boating on a Sunday.

I am a very positive person and being diagnosed with breast cancer has changed my attitude to life, big time.