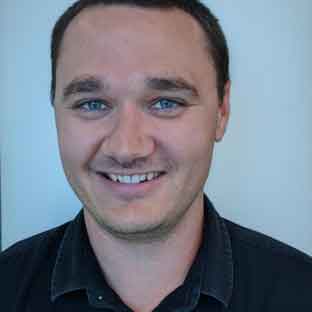 Final year advanced trainee Joel Wight had his heart set on a surgical career, but as his medical training progressed, he realised this was not a long term passion. A “fortuitous” haematology rotation placement finally provided what he was looking for – cutting edge medicine with a strong focus on people. “I absolutely loved it, I fell in love with it straight away,” he recalls. With only one exam remaining and a final clinical year before his career takes full flight, he expects to combine both public and private haematology practice, admitting both systems have inherent advantages.  He expects to eventually move to a regional centre, where his skills can be of benefit to patients in both streams and where he will strive to really make a difference.

Tell us about your journey to a haematology career.

Since I was a kid I wanted to be a doctor and never grew out of it.

I had a second surgical rotation at the end of my intern year, which I swapped out of. As it happened the thing I swapped into was a haematology rotation. It was quite fortuitous because I really enjoyed it; I fell in love with it straight away.

What did you love about it?

I think you fall in love with a specialty because of the people who inspire you.  I had a few really good mentors who practised such good medicine and I just wanted to be like them. But there are other things that made haematology really attractive. It is very cutting edge.

For example, if you look at CML (Chronic Myeloid Leukaemia), it has gone from a death sentence to a manageable, curable disease. CML is the poster child, but there are other haematological diseases where we have made some massive inroads in the past 20 years.

I also like the variety. When you do a general clinic, if you see 15 patients you might see 15 different diseases, which is kind of exciting.

The other thing I love about haematology is the ‘completeness’ of it. If you are a medical oncologist (and I say this with no disrespect at all), then by the time a patient comes to you to you, the surgeon has chopped out the tumour, the pathologist has diagnosed the tumour and the radiologist has staged the tumour. When they come to the medical oncologist, they manage the treatment. Where as in haematology, usually you get a GP referral, and then the haematologist does the bone marrow biopsy, goes to the lab, examines the blood cells and the bone marrow and makes a diagnosis. Then you come back to the patient and you give them the diagnosis and tailor a management plan that fits for them. And then you journey with them through that treatment from start to finish. Sometimes you get to cure people and you don’t need to see them again.  The hard part is when people, particularly young people, have a really nasty diagnosis. But even in that, it’s nice to be there for them when the chips are down.

What in your view are the pros and cons of public versus private practice, and what path do you expect to follow?

I think my career will probably entail both. I think the way the medical market has gone for jobs, if you want to be in a big public hospital, you need to be in the research space with a university attachment.

I am not a particularly academic person. Being in a big research institution, even though I see the importance of it, is probably not where my skills are best used. I can see myself in a regional centre, working in both public and private systems and doing laboratory medicine as well.

The advantage of private practice is that things are much more efficient and you get that continuity with your patients. In the public system, it’s  much harder to stay across everything.

I believe in public medicine, and if you want to keep your skills up in the “heavier” parts of haematology such as bone marrow transplantation you need substantial public work. But I also believe in the efficiency of the private system.  Each system has its advantages and I would like to work in both. When it comes to preparing for private practice, support from the PCPA has been an invaluable part of my advanced trainee experience and in particular, their therapy based training programs.

What in your opinion will be the next big advances in haematology that you are likely to be part of in the next 20 years?

Things are moving really quickly and in low-grade lymphoproliferative diseases like CLL, follicular lymphoma and mantle cell lymphoma, we are making real inroads. These have been considered incurable diseases, although people can live a long time. With more modern therapies like targeted therapies and immunotherapies, I think we are starting to change our paradigms. We are starting to talk about cures for these diseases.

In combination, targeted therapies and immunotherapies will probably take the place of chemotherapy in the next 10 years.  In the future it would be really nice if someone comes to you with lymphoma or CLL, to be able to say ‘you don’t need chemotherapy’.

What I would really like to see take off is immunotherapy in the aggressive tumour space.

With AML, (Acute Myeloid Leukaemia) the fact is we haven’t made any real inroads for a long time. We have improved how well we can manage it (in terms of supportive care, prognostication, stem cell transplantation etc.), but we are still using the same two drugs we were using 40 years ago. In 2017, more people still die from AML than live from it. This will be the biggest challenge for haematology in the next 20 years.

Do you have a patient who has left a lasting impression?

I have so many. One springs to mind. Mr H was an Iraqi refugee. There are very few Christians in Iraq. During the time of the first Iraq war, he was quite heavily persecuted. At some point in the war, he ended up with a brain injury at the back of his brain that controls vision. He could think normally and he could speak, but he could not see. Functionally, his eyes were fine but his brain could not interpret the signal. Mr H ended up coming to Australia as a refugee. I met him when he developed lymphoma. He was on the ward and he did not speak a word of English. His family was not there most of the time. It was a huge challenge as we had literally no way of communicating with a blind man who couldn’t speak the language unless we happened to have a family member or an interpreter. Despite everything he remained cheerful, even though he had been through so much. He was so accepting of everything. All you could do was hold his hand to let him know everything was okay, but he handled it all with such grace. The resilience of some people astounds me. I believe he is still in remission.

Also, I remember a guy who was very rough, previously using intravenous drugs and heavily involved in a bikie gang. Really serious stuff. He got a very nasty form of AML. It was just amazing to see the walls come down over a series of weeks while I was on the ward. He started off saying, ‘If you don’t cure me I am going to come after you’. But day after day, by being gracious and trying to help him, the walls came down. He left hospital in remission and he was just crying. He gave me a big hug and said, “If you ever need anything you just let me know”. That’s just a couple of people who I remember out of many.