This International Women’s Day, we celebrate all women – particularly those who are facing a breast cancer diagnosis as well as those striving to make a difference.

STA oncology liaison Suzanne Lombardo understands both perspectives. In this piece, she explains how her own experience with the disease has changed the way she now approaches her work.

“I was diagnosed with breast cancer just over two years ago, when I was 61. I am pretty fit and healthy, and I had made a decision to have breast reduction surgery. It was something I just wanted to do for myself and it has saved my life.

Three days after my operation I returned to the hospital to get my drains removed. My appointment was to see the nurse however when I arrived, I was told that my surgeon wanted to see me. As I sat down he said, ‘I have good and bad news’. This was very unexpected. 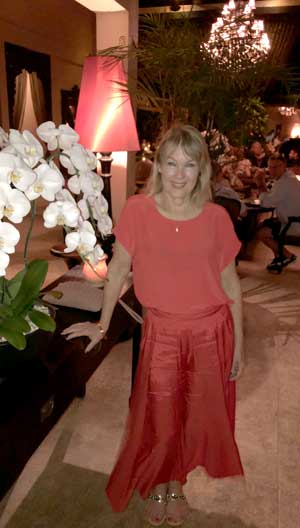 He was holding a pathology report. Not all plastic surgeons have the breast tissue examined by a pathologist but thankfully, mine did. The surgeon told me that while he had seen nothing during the operation at all, the pathology had revealed two small malignant tumours in my left breast.

He showed me the report which he had written ‘WOW” over as to be diagnosed like this is very unusual. I was stunned, as a mammogram only four weeks prior to surgery had showed nothing.

He immediately contacted one of the best Breast Oncology Surgeons in NSW and I was booked to see him at 7.30 the next morning. I expected to be told that they would monitor me, as basically I had already undergone surgery and the tumours were now excised with clear margins. Because of this expectation, and as I had kept my surgery private, I attended the appointment alone.

But I was then told I could still need a full double mastectomy, depending on the results of additional tests. Attending the appointment alone was a mistake, as I was so shocked I did not ask any questions.

I am a registered nurse, but I am the world’s biggest sook and some of the tests were quite confronting – with one of them, I had five needles inserted around the nipple and they injected a dye. The MRI scans were also really claustrophobic. After these tests I had lymph node biopsies.

It was determined that I had invasive lobular carcinoma, that was hormone positive and HER2-. It had not spread to my lymph nodes, thankfully.

I did not need chemotherapy, but I had six weeks of radiation treatment every day. I was due to start hormone therapy, but the overall benefit to me was going to be small, so in consultation with my medical oncologist I opted not to because of the possibility of experiencing an associated side effect. As a result, I must be very vigilant, and I have a regular MRI scan to keep an eye on things.

I coped very well with the radiation, although I crashed a bit about three weeks after finishing when I felt quite depressed.

I think it is because you are so busy when you are first diagnosed and all of a sudden, the ‘busyness’ stops, and you have time to think.

You do go through a grieving process after being diagnosed with breast cancer because it makes you face your mortality. Our breasts are strongly tied to our identity and you don’t give them up easily.

Everybody associated with my diagnosis and treatment was so kind and supportive and open with the treatment pathway and benefits. Everyone’s pathway is different.

How has my own diagnosis influenced my work? I have always been passionate about being a voice for patients and ensuring that doctors know about new therapies that can make a difference.

One of the products we market is the Oncotype DX Breast Recurrence Score test. This test basically determines whether women with my type of cancer really need chemotherapy, or whether they can be safely treated with hormone therapy alone and avoid chemo.

Despite the best efforts of my employer, this test is still not reimbursed for Australian women. It costs $5000 to have this test, but it is reimbursed in most other parts of the world and is considered a standard of care.

I did not have this test at the time of my own diagnosis, because of the cost. Having it would have put my mind at ease about whether chemotherapy would make a difference to my long -term outcome, based on my own tumour biology. Breast cancer is not a ‘one size fits all’. I know of women who have had the same diagnosis as me and had a recurrence even though standard pathology might have indicated their own risk of recurrence was small.

The thought of recurrence does play on your mind. In all my dealings now with breast cancer oncologists, I always remember there is someone like me who will ultimately benefit if I can provide doctors with all relevant information about new therapies or technologies like Oncotype DX.

For the patient, being armed with all the right information is empowering. While I no longer work directly with patients, I am working for them. I really love my work and I am really grateful that my own health is good.”